Because We Can - Fulltime RV'ing

Where We've Stayed in Tonopah, Nevada 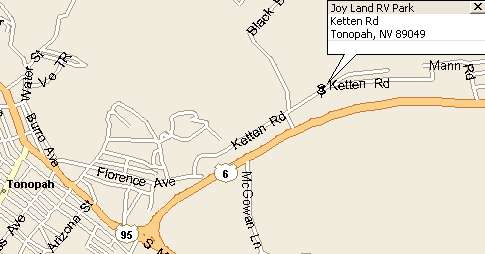 This is not the easiest to find, nor the easiest to access RV park. For easy access there is the Tonopah Station Casino in town. We have always had a somewhat stubborn bent, so just because the Twister Inn RV park no longer seemed to exist, it was no reason to stop at the Casino on our way thru town. You may wonder how we knew the Twister no longer existed. While it was in the Trailer Life Directory we were using, there were no signs, coming into town about it. We did notice a green and white, somewhat crude sign about the Joy Land RV park on the same street, so we figured it had probably changed owners. You can only see the park from the road if you are coming into Tonopah on US-6, look down and to the right after you pass Mann Rd, as it is 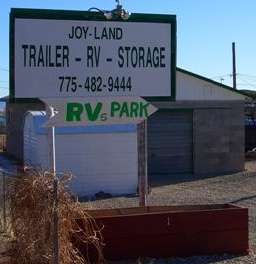 located well below the highway. One other very, very important thing. The enforcement of the 25 mph speed limit law is very strict in Tonopah, observe it. And no, we didn't get stopped, it's just that everyone was going the speed limit or a little slower and there has to be a good reason for that.

Back to RV parks, Ketten Rd is well marked so we made the turn but almost immediately had second thoughts.Just ahead there was what passed for an intersection. The road to the left was dirt, the road straight ahead was dirt and the road to the right, while paved, was narrow, sloped downward and appeared to be lined with what could best be described as older dwellings, the kind that gather accumulations of discarded objects over the years. We decided, rather than unhook, turn around and go back to the Tonopah Station RV park, we would press on. After all we are calling our travels, an adventure. A short way down the road the park on the right.

Pulling in, Linda went to the office to register, but no was was there. In a couple of minutes a fellow came up, said the owner works in town, but would be here in a little bit.

We continued to wait, less and less patiently as time passed. Finally someone came up, turned out to be the same fellow as before, and directed us to park in a pull thru site. To get in it we looped around the inside of the campground and pulled between a tree and a rock bank. The tree was so close we couldn't open the street front slide and the turn to the exit would be so sharp that, because of the angle we were at, we weren't sure we could pull forward to exit. Hooked up the water and electric, but having empty tanks, not the sewer. Put our money, $14, in an envelope and put it in the slot. Later, after dark the owner came by, gave us a receipt, said we had pulled into the site the wrong way, but at least we were in the only pull thru site in Tonopah. Also mentioned there was a cable TV hookup. Now the book had mentioned CATV but we hadn't found it. What it is, is a long piece of coax cable off to the side. You need a barrel coupler to hook it up, something that for whatever reason, I had brought along. In the morning we backed out of Tonopah's only pull thru site and continued our journey. We would give this park a 5 and would stay here again if we needed to overnite in Tonopah.