Because We Can - Fulltime RV'ing

Comstock Country RV Park,located on the south side of town near the Hwy 395 and 50 intersection. Though the address given for the park is for South Carson Street (Hwy 395), the entrance is off Clear Creek Rd. Clear Creek is the first stop light south of the 395 and 50 intersection. If you're coming down the hill on 50 from Lake Tahoe you will see the park off to the right at the very bottom of the grade. If you're coming south on 395, stay in the right hand lane (all three lanes continue past the intersection with 50) and turn right at the light onto Clear Creek Rd. 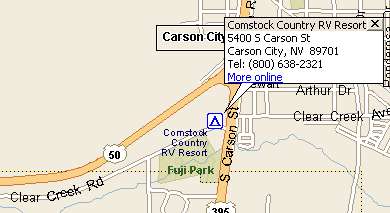 After registering at the office you will be led to your site. We found there were a few low hanging branches that you need to be watching for as you are driving through the RV park. If you have a satellite dish they will most likely assign a site in the south end of the park. It is the most open, while the north end of the park has a number of trees which may block any satellite signal. Since we did not have a satellite dish yet, we were assigned a site in the north section. This suited us fine, though there was a tree branch that was close to the street side of the coach. The site had full hook ups including cable TV, a very nice addition, plus there was plenty of room to park our toad. Since were going to be there for a week we opted for the weekly rate of $30/day based on a weeks stay. This was certainly more than we wanted to average per day, however we were in the "getting our feet wet" process and we had a lot to finish up getting the coach ready to travel, so we weren't looking for the most inexpensive place, rather what we wanted was convienence with full service hookups. 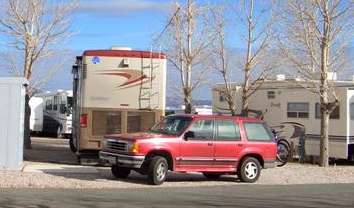 The monthly rates were considerably less, with a 50 amp site being the highest priced at $390 per month, winter rate. We were cautioned the most expensive time to stay in the Reno-Carson City area is during the "Hot August Nights" celebration when all the hotels, campgrounds and RV parks are generally full and reservations are a must. Also be aware there are many semi-permenant and permanent residents at this park. Since we were here in the midst od winter, both the pool and spa were closed. Also we did not avail ourselves to the laundry facilities, though we saw numerous residents utilizing them. While ratings are subjective, We would give this park an 8 and would not hesitate to stay here again.

Pinon Plaza RV Resort, Located on Hwy 50 about 1.5 miles east of US 395 in Carson City, NV. There is a new 395 bypass being constructed on the east side of Carson City and when it is completed (sometime in 2006) the Pinon Plaza RV Resort will be just west of the bypass on Hwy 50. Look for the Pinon Plaza Best Westen Casino and Resort sign on the South side of Hwy 50. Enter the resort on the east side and go toward the back, you will see the signs for the RV Park which is in the southeast corner of the property. Try not to enter from the west side of the Resort (there is a traffic light which mkes it an appealing entrance) as you will have to drive completely around and through the Casino hotel complex parking lots to get to the Rv Park. 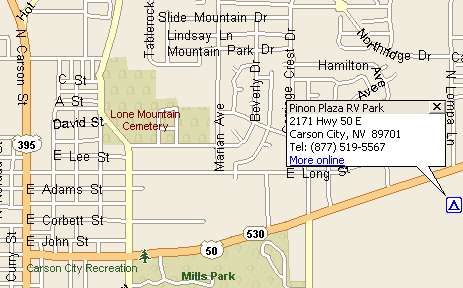 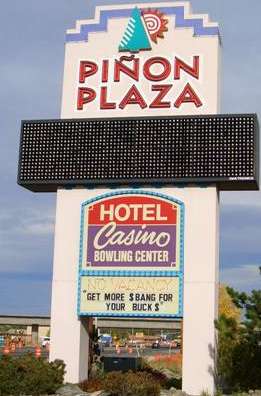 This is a small park with very narrow sites. We stayed here in our former RV, a 24' Class C with no slides. While there were a limited number of coaches with slides at the park, if two coaches with triple or quad slides were parked next to each other it would not make for a very pleasant experience. Another negative for this park was the person in the office. in all our years of camping, and we have camped for almost 40 years, never have we experienced a more sarcastic, obnoxious office person than we did at this park. Based on our experience checking in, we would never have any desire to return to this park.

In addition to the obnoxious old man in the office,the place is almost littered with "do not" signs, though most seemed to be totally ignored by the people staying at the park. About the only good thing about the place were the rates, which were $14 per nite in the winter and $24 in the summer. We would give this park a 4 and would not stay here again unless there was a change in management style and an upgade of facilities. However, if placing a wager is important to you it would probably be quite accetable, provided your rig would fit into your site.